In Dahl’s vision, witches are vile hunters and children are their prey. They hate the stink of children and hope to eradicate them. They have no toes, wear wigs to conceal their lack of hair, and hew closer to demons than women. An unnamed boy (Jahzir Kadeem Bruno) runs afoul of a coven of well-gloved, gross-scalped witches while attempting to enjoy a holiday hideaway with his Grandma (Spencer). The boy discovers the witches’ scheme to transform all the world’s children into mice through poisonous chocolate and candy stores. Heh, classic Dahl. And did we mention the boy himself is transformed into a brown mouse?
/134312942/COS_Outstream_1_1

This time around, Zemeckis trades 1980s London for 1960s Alabama. The witches are Nice but of a modern cadence, loosely alluding to the mean women of our own era. Yet, it’s still a race to stop a cell of nasty witches while reversing our poor hero’s mouse status, done up Zemeckis-style.

Which Witch? It should be stated that Nicolas Roeg’s 1990 cult classic (available on Netflix at the time of this publication) is a thing of cruel beauty. The Jim Henson effects, personally overseen by the Muppet man himself, hold up to frightening effect. Angelica Huston’s take on the Grand High Witch remains a marvel of vamping. Comparisons are unfair. There’s 30 years of style and context separating Roeg’s film and Zemeckis’ brew, so undo whatever spells you might bring along.

Zemeckis conjures something like a PG-rated installment of Tales from the Crypt, or even Lovecraft Country. His Witches is a zippy cautionary tale, fun if not fleeting. By implanting the film in to the ‘60s South – especially in a fever-pitch era, relatable in light of Black Lives Matter – Zemeckis intensifies the fear in meaningful new ways. The desire for witches to suppress and control minorities and children stings, adds a reminder of just what kind of people seek power and how grotesquely they do it.

Critically, perhaps, the efficiency of this take comes at the cost of lasting memories, but the film whizzes along agreeably all the same. Zemeckis, the 60+ “whiz kid” with the effects lives up to his reputation, always rushing. But he still manages to bring light magic when he can. And frankly, there’s something delicious about imagining a generation of kiddies shrieking in terror at Hathaway’s Betsy DeVos-styled take on the Grand High Witch. A nice, tight-faced blonde woman of means “just trying to help.” 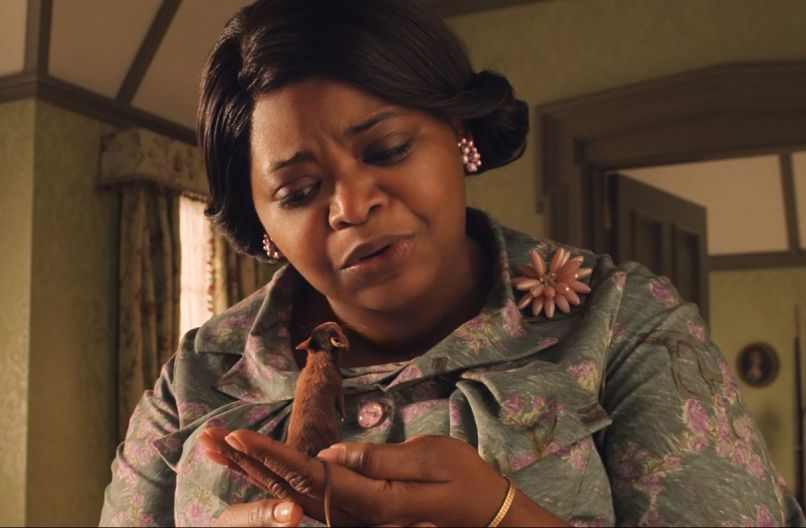 Practically Magic: The cast is so charmed, it’s like, watching grown-ups have fun in a production aimed for kids, right? Young Jahzir Kadeem Bruno is a sympathetic new face, wonderfully resistant to mugging. And when he voices the mouse, there’s a nervous enthusiasm that befits the material. And the great Octavia Spencer’s take on Grandma is bigger-than-life. Spencer preaches to the mystic, but deep down is a loving family presence that warms the nasty film at all the right points.

But at the risk of sounding bewitched, Hathaway kinda steals the show. Adds a contemporary spin to Dahl’s famed monster. She’s a rich blonde woman, smiling at the front of her “Royal Society for the Prevention of Cruelty to Children” while she targets Black children living in impoverished conditions? Where have we seen this level of mannered “goodness” masking cynical (if not downright cruel) behavior before? I’ll let you fill in the rest, but Hathaway’s Witch has some mordantly funny overtones. 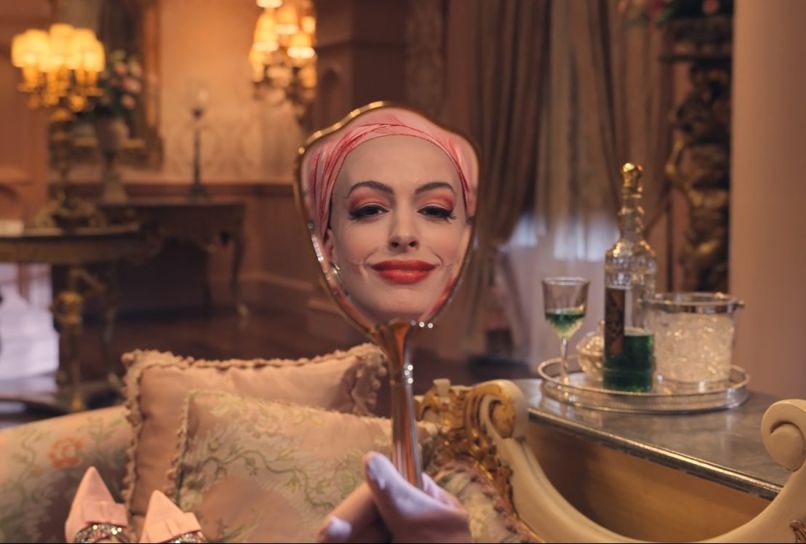 And more to the obvious, it’s still a watchable, freaky thing, her Grand High Witch. The actress runs away with this project, riding it like a gaudy broom and cackling all the way. Hathaway growls and screams and demurs in a sort of mock-German accent about “EXTERMINATING ZE BRATS!”, wearing her wart-headed bald cap with a level of pride and conviction.

With a few choice enhancements (presumably digital and cleanly applied), Hathaway’s Witch stalks her hotel like a single-toed raptor. When distraught, or menacing, her already-open mouth pulls wider, the scars at the corners of her lips opening further to reveal what look like miles of sharp teeth. Hathaway’s having the time of her life; avid enthusiasts of subtlety need not apply. 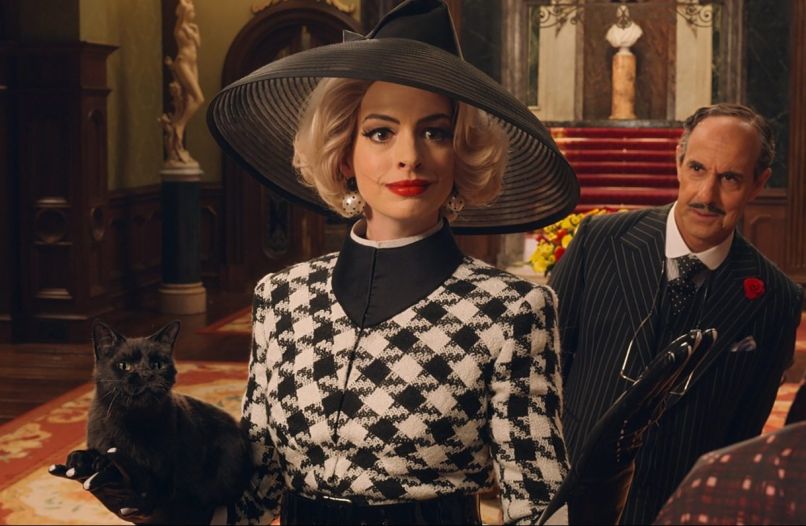 Parental Guidance: Tri-clawed hands stretch and creak – toward the camera – to attack a trio of mice running away in a duct. Witches gasp and scream and fart themselves into the air, leaving behind puffs of purple smoke. Children are endangered. The Witches runs the gamut from mannered discomfort to real menace, and while there are joys and silly bits too, that PG rating is not for all children. Why bring this up? Because every audience member, particularly every child’s, needs and tolerances are unique.

Moms, dads, keepers of kids, be warned. This might require a first viewing before unleashing it on the under-10 set. The Witches is swift entertainment, but the themes and scary bits might land heavily. Zemeckis’ gross craft and the film’s anxious tone might be just a bit much for what’s ostensibly a family affair, so broom lightly. But if you’re looking to instill a healthy sense of panic over nefariously polite adults in your kid, this may be a functional horror flick as well.

In the halls of Dahl, however, Witches is among the author’s more spine-tingly efforts. It’s even darker than the child death camp that is Willy Wonka. If Dahl’s initial goal was to evoke the importance of distrusting creeps, then consider Zemeckis’ vision a spooky new warning.

The Verdict: The Witches has its boils. The pacing occasionally jitters the tone, and the ending just doesn’t work. But at the risk of playing the good witch here, there are just enough goodies here for parents and well-prepared kiddies alike. The nifty VFX, performances, and modern updates are what make this remake an easy-enough treat.

Where’s It Streaming? Since no amount of magic can do away with COVID-19, here we are, as a once-tentpole for Warner Bros. takes to HBO Max in the U.S. from October 22nd. Outside of America, The Witches opens in theaters on October 29th.

Source: Anne Hathaway Casts a Spell Over The Witches